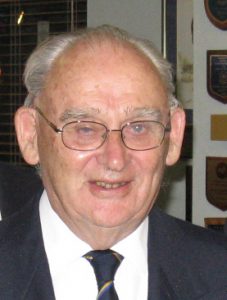 Bob was one of the first rowing members of the club after its formation in 1948 by a group of local gentlemen who recognised the suitability of the river for rowing and that the creation of a club should be part of the return to normality after the war. He joined as a teenager and with other young men helped develop rowing crews that could compete at regattas around the region. He was a member of the new club’s first crew to win a regatta in 1951 and appropriately it was at Peterborough Regatta.

Bob continued to row seriously throughout the 1950’s apart from his 2 years of National Service. He achieved racing success in crews at various events and was a regular in 8’s at the Tideway Head. During this time he served as Club Captain from 1959 to 1961.

In the 1960’s he started to get involved in coaching and retired from rowing. He developed a passion for helping others to achieve in the sport and continued coaching for the rest of his life even when he was no longer able to cycle alongside and was limited to standing on the bank and observing.

It was notable that Bob coached the first club crew to enter Henley Royal Regatta in 1970. Whilst this crew was not successful at Henley he always kept his eye on success at the highest level. He would urge his athletes to aim to win at the highest level even when that seemed over-ambitious. He believed that by aiming high you would at least stretch yourself even if you did not attain that high ambition.

Bob was a great believer in the science and technology of rowing and of the physical development of the athletes and was a great advocate and promoter of courses and qualifications in coaching to those wishing to coach. Bob was one of the first coaches to attain the Silver Rowing Coaching Qualification from the Sport’s Governing Body, The Amateur Rowing Association now British Rowing.

Through the 1970’s and 1980’s Bob mainly coached adult crews and was again Captain in 1986. But probably Bob’s main passion was developing the standard of rowing at the Club to achieve the highest standards and aimed at doing this from Junior level and during the 1980’s the plan developed for a more dedicated junior section of the club. Working together with Steve Casey this plan came to fruition with the creation of the post of Junior Coordinator, which Steve Casey held for some years with Bob’s support. In 1998 Bob took over this post and held it until 2009 during which time the club became a Project Oarsome centre in 1999. He played a very big part in taking the club’s juniors to the highest level. This term in office saw the club’s highest racing achievement with the winning of the Fawley Cup at Henley Royal Regatta in 2008. The two PCRC members in this winning crew were James Fox and Adam Neill who both went on to join the National Squad with James winning Paralympic Gold at Rio as well as several world titles . Other juniors from this period raced internationally at junior level.

Bob knew that to give the juniors the best opportunity to race competitively they needed the best equipment and he dedicated much of his time to fundraising and securing grants which enabled the Club to build and increase its fleet of boats suitable for Juniors.

Apart from coaching Bob served as an umpire in the 1970’s and 1980’s and always helped at Peterborough Regattas and Peterborough Head of the River. At regattas he frequently commentated and at head races he led the start timing team for many years. Latterly in his role as President he was always ready to get his blazer and tie on to name a boat or to present prizes. He was a regular at club social events being partial to a beer or a whisky or two!

Bob was no “push-over” and often held strong and passionate views and he was not slow in expressing these. However, notwithstanding any the differences with others that may, and often did, result there was always respect from all sides, especially if a little whiskey with a dash of water followed.

Away from rowing Bob was an engineer having served a traditional apprenticeship after leaving school and for many years was the manager of Westcombe Industries, which was an engineering company set up to train and employ people with disabilities. It was for this work that Bob was awarded the M.B.E.

Bob is survived by his wife Jill, their 3 children, grandchildren and their great grandchildren who have asked that I pass on the following message to all who knew Bob:

“In his last few days we asked him if he needed any shopping, thinking there may be some food or drink that he would like. He said very firmly that he would like a boat, a very fast racing boat. We would like to honour that wish and get him a boat. Bob used to say you need to aim high. With that in mind we would like to raise money for a Filippi boat to be donated to Peterborough City Rowing Club to help our rowers with the potential to reach National/International standards. Donations can be made here

“To help us remember all the good times please share your stories and photographs of Bob in the memory book.  We can’t be together during this difficult time but this will help bridge the gap and provide comfort to us all.”